There are two notable threats to ladybird populations worldwide, as well as in South Africa. These are the presence and increase of the Harlequin Ladybird, an invasive species of ladybird, and the use of pesticides. Both risk factors will be briefly discussed below.

Gardeners and farmers alike are constantly confronted with challenges to manage unwanted insects that cause damage to plants and crops. While ladybirds are a natural predator of a number of unwanted insect species, unfortunately many farmers and gardeners still consider the use of pesticides as the most effective solution to contain pest insects. Ladybirds sometimes become unintended victims of pesticide usage.

There are a number of compounds commonly found in household and agricultural pesticides that may be harmful to the health of ladybirds. For example, natural pyrethrins, a compound in many organic and manufactured formulations available for insect control, kill ladybirds on contact if a full cover spray is administered on plants, although ladybirds are not likely to be negatively affected if they prey on insects sprayed with the substance. Alternative solutions to addressing the issue of aphids and other harmful insects are available and some of the most popular options are listed in the fact sheet on our gardening page.

The Harlequin Ladybird is an invasive species from Asia, which competes with the indigenous ladybird species for food and preys, amongst others on indigenous ladybirds and their larvae. These beetles have been argued to be responsible for the decline in native ladybird populations in countries around the world. They were first noticed in South Africa in the Western Cape in the early 2000’s, after which they have rapidly spread to other parts of the country as well. Especially in the Western Cape, these beetles are of concern as they feed on fruit and may taint grapes and spoil grapes harvested for wine-making. They are easily identified by a “M” or “W” on their heads.

A citizens-based project was recently launched at the Stellenbosch University’s Centre for Invasion Biology where the public can submit images of harlequin ladybirds with information on where they were spotted, or submit specimens of the harlequin ladybird to the researchers for analyses and study to learn more about the behaviour of these beetles. For more information visit http://invasives.org.za/events/item/1205-research-on-harmonia-axyridis-in-south-africa-knowns-unknowns-and-flags

The Stellenbosch University Centre for Invasion Biology’s pamphlet on the Harlequin Ladybird can be found here: Harlequin pamphlet 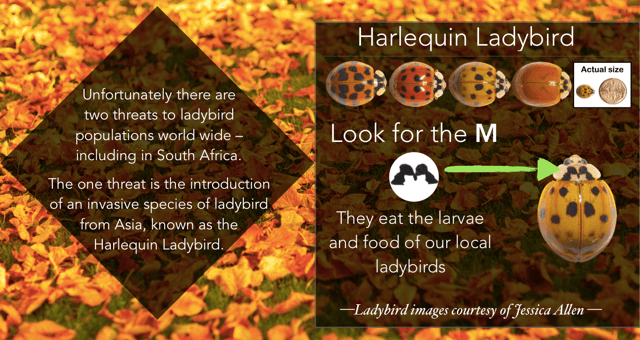